Are You Goal-Oriented or Vision-Oriented? Part I

Which of the following two statements is a goal?

(1) Clean out and organize the garage.

How you answer the question says a lot about how you do life.

Hard-Target Goals
In my experience, somewhere around 60-65 percent of people will say that (1) is a goal, whereas (2) merely expresses an aspiration. For these people, a “goal” is a hard target to aim for. Anything less than that is just a good intention.

Indeed, anyone who has ever attended a workshop on increasing personal or professional effectiveness has heard this maxim: 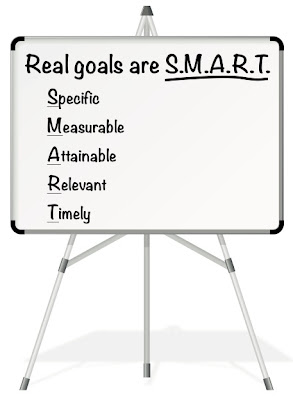 By that measure, cleaning up a garage qualifies as a goal. It’s specific (you can pinpoint what, why, who, where, and which). You can measure whether it’s happened. It’s easily attainable, or doable. It’s relevant in that it matters (maybe to your spouse, even if not to you). And it’s timely in that you can attach a date to it.

However, wanting to develop more patience would not qualify as a S.M.A.R.T. goal, because it’s too undefined, is not easily measured, is questionable in terms of how attainable it might be, and cannot be put on a schedule. About the only thing it may have going for it is that it’s probably relevant (especially if you’re an impatient person).

But Guess What?
The other 35-40 percent of people will say that both statements above are goals. In fact, there are many people whose goals are mostly like 2, and not at all like 1.

So who’s right? The answer is—both!

If you understand how this works, it will save you and others lots of trouble, especially when you’re dealing with Someone Who Is Not Like You.

Goal-Oriented People
Goal-oriented people generally operate with what might be called a “linear” style. They set a goal, then move along a fairly straight, direct path to reach it. Once they reach it, they check off the goal as “done.” Then they determine their next goal and go to work to achieve that. For the hardcore among them, their motto is, “Plan your work, work your plan.” 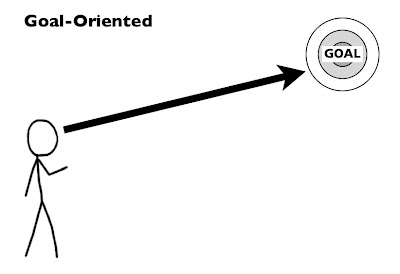 Whenever I draw this diagram for goal-oriented people, they invariably nod their heads strongly in agreement. They can see it perfectly. “That’s me,” they’ll say. “That’s exactly how I do life.”

Vision-Oriented People
But then I draw another diagram. It’s meant to show how the other 35-40 percent of people do life. They don’t do life by goals—at least, not the sort of  S.M.A.R.T. goals that goal-oriented people pursue. They do life by. . .well, what we might call a vision. That is, a picture in their mind. It could be a picture of a concept. Or of a relationship. Or of an ideal. Or of a cause.

The point is, they see a vision that looks interesting. And they go explore that vision for a while.

Let’s say their vision is the concept of Native American lore. So they buy books about that. They go online and look up websites about it. They start downloading music that expresses NA culture. Maybe they even go to a pow-wow or spend a weekend at a sweat lodge in order to have the authentic NA experience. They really “get into” the whole concept of Native Americans.

We could diagram their activity this way: 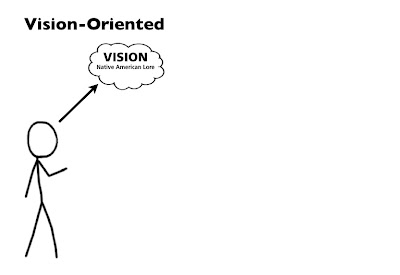 But then one day something interesting happens. A new concept comes along. They start to dabble in it. Before long that new interest has supplanted their focus on Native American lore. Now their time and energy is devoted to, say, nature and the environment. They join the Sierra Club. They buy books on energy usage. They get into recycling. They start biking to work. You get the picture. 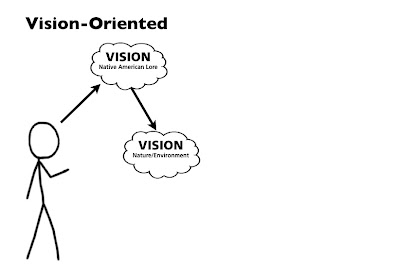 They hang out with the concept of nature and the environment for a while.

But then once again, another concept comes along and starts grabbing their attention. Say, photography. They really start getting into photography.

But eventually that kind of run its course, so they take up blogging. They really get into blogging.

Then one day, yet another concept piques their curiosity, and they start to move toward that. But before they get there, another concept that has even greater appeal pops up, and they veer off and go explore that. 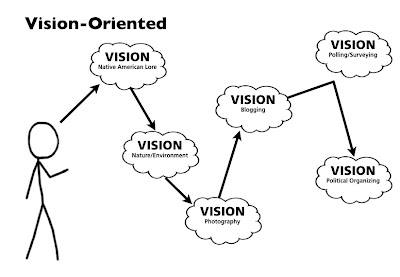 “What’s WRONG With You?!”
If you’re a a goal-oriented person, I’m willing to bet money that when you see the diagram just shown, your instinctive reaction is to say, “What’s WRONG with you?!  You’re never going to get anywhere!”

On the other hand, if you’re a vision-oriented person, I’m willing to bet money that when you see the first diagram above (showing the goal-oriented person), your reaction is, “What a boring life that must be! To wake up every morning with a list of exactly what you’re going to do that day, and just march it through? I’d rather die!”

In Part II (next post), I’ll talk more about how these differing styles can get along, despite their conflicting perceptions about “goals.” What we’ll see is how much each style needs the other.

For now, just consider this: contrary to popular opinion, not everyone in the world is goal-oriented. Not in terms of hard-target, S.M.A.R.T. goals. And it’s pointless for anyone to say, “Well they should be!” Because they aren’t and they won’t be. You’re never going to take an inherently vision-oriented person and “turn them into” a goal-oriented person. That vision-orientation is a part of their hard-wiring. What we call their giftedness.

You can never change a person’s giftedness. Nor do you want to. Because a person’s giftedness is the wellspring of what makes them who they are, as well as how they were meant to contribute to the world. Change that, and you would literally obliterate the person and turn them into your own little creation. Thank God, the power to do that is not given to humans (though sadly, many try).

The better path is to accept people for who they are. Is your natural bent toward setting goals? Great! Plan your work and work your plan.

Or is your makeup more vision-oriented? Great! Dream, explore, create, and relate.

It’s a big world with lots to be done. You can help by knowing what you were designed to do, and doing it. But as you do, beware of criticizing others who literally see the world differently.

POINT OF CLARIFICATION: I know I’m making it appear as if everyone is either “goal-oriented” or vision-oriented.” But that’s just a broad generality. The truth is, everyone is unique. Perhaps a more precise way to see things is that people’s orientation varies along a spectrum between hard-target goals at the one end, and “softer,” more visionary/conceptual intentions at the other end. Thus some people are highly inclined to do life by S.M.A.R.T. goals, some incline toward visionary goals, and some are comfortable with both.

Question: In the main, would you say you are more goal-oriented or vision-oriented? What does your history of achievement show?

Question: Think of Someone Who Is Not Like You in that they do goals very differently than you. What happens when you interact with them?