Every once in a while I come across a book where I go, “Dang, I wish I’d written this myself!” Such was my reaction when I downloaded the polarizing new paperback by Dale Stephens entitled, Hacking Your Education: Ditch the Lectures, Save Tens of Thousands, and Learn More than Your Peers Ever Will. 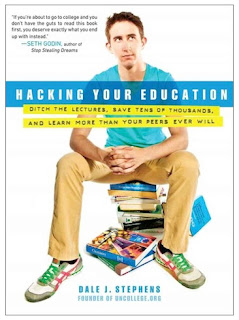 At the Giftedness Center, we work with hundreds of young adults who are in college or recently graduated. They are all asking some form of the question: What should I do with my life? So naturally, I was intrigued by Stephens’ polarizing take on higher education.

Everyone knows you must have a college degree if you want a decent job, right?

Well, that’s what Baby Boomers believe. No, not just believe—they are passionately, desperately, I daresay irrationally committed to that dogma!

But Stephens is a 21-year-old Millennial (an 18-30-year-old). And Millennials are starting to question the value of this whole college thing. Hacking Your Education is only the latest expression of a generational primal scream that I predict will soon turn into a deafening roar of rage against an economic system that is failing to deliver on its promise of career opportunity in exchange for buying a degree.

“If the best experiences happen outside the classroom, why am I paying $42,000 a year to sit in the classroom?”

“Will your degree even get you a job when 44.4 percent of college grads under twenty-five are unemployed or working jobs that don’t require their degree?”

“He Is Full of Crap”
This book only came out on March 5th. But almost everyone who’s already read it either loves it or hates it.

The Wall Street Journal invited Stephens to showcase his premise by writing a March 1st article entitled, "A Smart Investor Would Skip the M.B.A." Letters to the editor immediately dismissed him as simple-minded.

John Byrne of C-Change Media, and formerly with Business Week and Fast Company, blogging on Poets and Quants, went much further: “Frankly, he is full of crap.”

Really?! Let’s consider that. Stephens quit school after fifth grade, and quit college before his freshman year ended. Nevertheless, his bio on Amazon says he’s founded a group called UnCollege.org, published an extremely readable, reasonable, thoughtful, and practical book with a major publisher, written for The Wall Street Journal, been covered by The New York Times, New York Magazine, Fast Company, and Forbes, appeared on TEDS, consulted with universities and technology companies, and been named a Thiel Fellow recognizing him among the top twenty-four entrepreneurs in the world under 20 (plus a $100,000 grant).

Hmmmm. Stephens has done all of that and he’s full of crap? If so, every adolescent in America needs to find out what sort of granola he’s eating and start gorging themself on it, so they can get full of crap, too.

His critics sneer, “What does a 21-year-old kid know?”

Well, for one thing, he knows that the world has changed.  In the ’60s and ’70s, Boomers could party on drugs, sex, and rock ‘n roll all through their twenties and still end up doing pretty well—some of them obscenely well—because the world economy favored America. In that economy, even dumb people could make money.

Not anymore. Whereas a Boomer only had to compete with 76 million other Boomers, Stephens’ generation must contend with the 350.7 billion people in the world now under 30 (50.5 percent of the world’s population). The global economy is already 1.8 billion jobs short of employing everyone who needs employment (Jim Clifton, The Coming Jobs War). In the U.S., 37 percent of Millennials are unemployed. Less than 40 percent of those who are employed have full-time jobs (Pew Research Center).

What Really Matters?
“Okay, but that just means it’s more important than ever to get a good college education,” most Boomer parents would say.

Stephens would not quibble with that. Nowhere in the book does he explicitly tell his peers to skip college.

But at 21, Stephens knows something infinitely more important than whether one should or should not attend college. He knows that what matters most to a person’s life and career are not the letters after their name, but whether they have figured out who they are, how they learn, and what native talents they bring by which to add value to the world.

As a society, we do nothing to help young people start with those basic insights. Nor have we figured out how to get a young person from high school graduation into the adult world of work.

Most Boomer parents think that’s what college is for. Wrong! Colleges have no vested interest in helping young adults determine what to do with their lives. To be perfectly cynical, colleges benefit when students don’t have a clue. Because that means more semesters in college when students change majors. Which means more tuition dollars to the colleges. Dollars paid by students and their families with hard-earned jobs, savings, 529 plans, and taxpayer-backed student loans.

Colleges always get paid, even if a student graduates and can’t find or hold a job and/or defaults on their loan. In short, colleges have no skin in the game. And as things stand, they can raise tuitions as high as they want (at least, until the bubble bursts).

Meanwhile, colleges assume that students have already determined what career they want to pursue, and are attending college to prepare for that. But the truth is, most 18-22-year-olds have absolutely no clue what to do with their lives.

Is Hacking Your Education the final word on how they should go about getting that clue—along with a life? Well, of course I won’t say that it is when I myself am in the thick of pursuing that very aspiration. But I’ll hand Stephens this: he knows how to talk to his generation. And he offers them as brilliant a template for lifelong learning and for learning apart from traditional means as any I’ve ever seen. It’s far from a perfect book. But like I said, I wish I’d written it myself!

If every Millennial were pursuing life as intentionally, responsibly, and authentically as Dale Stephens apparently is, they would not only end up as successful, satisfied people, they would undoubtedly change the world for the better—with or without college.

Something to do (if you are 30 or older): Think about a Millennial (18-30-year-old) that you know. Invite them to get together informally (e.g. at a Starbucks) and ask them what they think they’d like to do in life to earn a living. Why? What could you do to help them as they figure that out?