The Dark Side of Giftedness 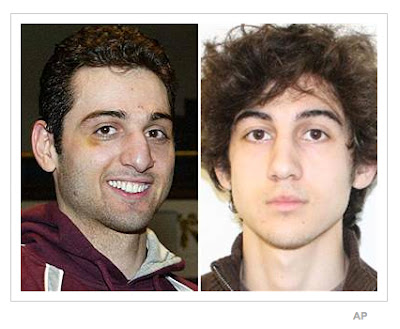 Savage events like the bombings at the Boston Marathon this past Monday provoke countless thoughts and emotions. For me, they only deepen my deeply held convictions about two disturbing realities: (1) evil is real, and (2) it can incarnate itself by co-opting the power of human giftedness.

In short, giftedness has a dark side.


I was scheduled to write on “The Hard Truth About the ‘Soft Stuff.’” But the breaking news has beaten me to the punch. In terms that are so heart-rending they bring tears, the world on Monday shouted loudly and clearly that “soft stuff” like people’s motives and intent do, in fact, matter. Once again, the “soft stuff” literally became a matter of life and death.

We’ll talk more about the “soft stuff” next time. But today’s post must respond to this week’s sad event.

Boston Connections
First, a personal note. During my junior year at Harvard, I lived at 176 Commonwealth Avenue in Boston’s Back Bay, between Dartmouth and Exeter Streets. That is only two streets north and on the same block as the Boylston Street location where the first of the two bombs exploded Monday. I probably walked or drove by the site of the bombings a thousand times during the ten years I lived in Boston.

I also worked at a church on Beacon Street, just west of Kenmore Square. It sits right on the route of the Boston Marathon, maybe a mile and a half from the traditional finish line.

Every year on Patriot’s Day (which is an official holiday in Boston, always on a Monday), the whole region becomes one grand party. The day begins with a reenactment of Paul Revere’s ride and the battles of Concord and Lexington. Then the marathon begins in Hopkinton. By late morning, the lead runners are entering the Back Bay and beginning their sprint for the end.  I and my friends would always cheer them on from the second story windows of that church.

To this day I have many, many friends in the Boston area, and manage to get back there not infrequently.

So Monday’s bombings touch some very deep feelings and memories for me, because of my personal connections to Boston and my affection for that city. My time there affected the course of my life in ways I can’t even begin to describe.

But enough about me.

The Good News About Giftedness
Most of the time when we talk about giftedness, we are in celebration mode. Because giftedness is an inherently positive theme. While lots of people dwell on what is wrong with them, giftedness is all about what is right with them. Indeed, what is best in them.

To be specific: giftedness is about your inborn core strengths and natural motivation, which you instinctively use to do things you find satisfying and productive. Giftedness is not just what you can do, but what you love to do and, indeed, were born to do.

Every person has their own unique giftedness.

There are as many different kinds of giftedness as there are people in the world. It’s not what they do that defines their giftedness, but how they do whatever they do. Giftedness is a motivational pattern in their life.

Now all that is good news. In fact, it is very good news! And I love getting to celebrate that news with people, because most of the time they have never really come to grips with what their giftedness is or how valuable it proves to be in allowing them to make a contribution with their life.

Indeed, I often witness tears of joy as people wake up to the gifts their Maker has given them. How cool is that?!

Inherently Good But Morally Neutral
But at some point, I always have to caution people that while their giftedness is inherently good and was intended for good, every form of giftedness has a potential dark side.

The dark side is this: you can take the power that was given you (giftedness involves actual power; we’re not talking about toys here, but tools) for doing good in this world and instead use it to commit selfish and even evil acts that pollute the world with all manner of darkness.

The woman whose giftedness is all about meeting needs and handling responsibility can use that gift to raise confident, responsible children. But she can also use it to make her kids so needful of her and dependent on her that they cannot function apart from her, such that they remain functional and emotional cripples their whole lives. She’s set it up so that they can’t make it apart from Mommy.

The man whose giftedness enables him to persuade juries and win enormous settlements for wronged plaintiffs can use that same gift to browbeat his wife and children, turning every situation into a war of wits and words, which they are never be able to win.

The person whose giftedness for enlisting people in a worthy cause can use it to raise up a robust organization that develops sustainable economic ventures for people in impoverished communities. But that same gift may be used to build a cult that robs the life savings of its members and actually makes life worse for the people it supposedly is helping.

So you see, giftedness is inherently good, but morally neutral. It can be used for good or for ill.

In truth, the worst sins people commit in this world are not out of their so-called “weaknesses.” Rather, it’s when they take the full strength and energy of their God-given gifts and turn them to dark ends.

That’s why I say: evil requires giftedness to express itself in human form. And the greatest evils require a collection of people’s giftedness to pull off their dastardly ends.

To use the quintessential example: the Holocaust was a rather effective killing machine. An atrocity like that doesn’t happen apart from people with gifts for conceiving such a scheme, negotiating the policies and politics required, arranging for the financing, enlisting others in the deed, coordinating the efforts of all the players, handling all the logistics, devising all the methods, rounding up all the victims, and doing whatever else was involved in that unbelievably hellish affair.

A similar orchestration of giftedness produced 9/11. We're already learning the details about Boston.

Wasted Lives
When I see great evils inflicted by humans on other humans, I always feel a double sadness: sadness for all the people affected by whatever calamity has been perpetrated, but also a sadness about the energy squandered on such worthless ends. For if giftedness devoted to evil can wreak such havoc, what are the possibilities for giftedness committed to serving what is good, and true, and right, and life-giving?

It’s a chilling thought, is it not, that there are people in this world, right now, sitting in a tent in Afghanistan, or a room in Paris, or an apartment in Detroit, or a house in Arlington, Texas devoting the best of their energies and wits to the harm of you and me in order to serve whatever death-loving narrative they are choosing to believe.

All that giftedness! All the good it could do! All the power it has to benefit the world and its people! But tragically, it is given over to the service of darkness.

Whenever I think about that dark side of giftedness, I am compelled to reflect on my own motivational profile. What potential for evil do I myself possess? What are the ways in which I can be subtly seduced into using my gifts for self-serving ends? What false narratives am I personally buying into that, unless corrected, will inevitably lead to making my own contribution to humanity’s grief?

President Obama has asked us to pray for the people of Boston. I am doing so, and I strongly encourage you to do the same. I would add that we also need to pray for all the people of the world. And for ourselves. Because my faith teaches that “God gave gifts to men.” Which means we humans have been handed real power!

To me, that’s worth praying about. Because what we do with that power—both individually and collectively—is hardly a neutral matter. Given the possibilities, it only makes sense that we appeal to the Gift-giver to help us use our gifts for the good for which they were intended. Goodness knows if we don’t, then “evil is crouching at your door,” as another biblical passage warns, “and its desire is for you.”

Question: What’s your reaction to my assertion that evils like the Hollocaust, 9/11, and Boston are actually carried out through people’s giftedness?

Question: What do you suppose are some potential dark sides of your particular giftedness?

NEXT POST ON BillHendricks.net: The Hard Truth About the “Soft Stuff”