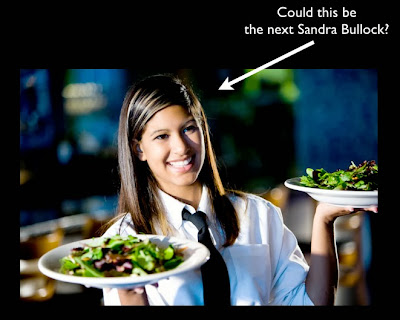 There’s an old saying that “everyone should wait tables at least once in their life.” I don’t disagree. But there are only three reasons for waiting tables. Two of them are legitimate. But the third one (and the most common) is highly suspect.

Almost no one starts out in their ideal job. A Mozart or Einstein comes along perhaps once in a generation, if that.

The rest of us have to find our path. Which means that most of us will sooner or later (probably sooner) end up waiting tables, either literally or figuratively.

Jennifer Aniston was a waitress and then a bike messenger.

Julia Roberts worked in a pizzeria and then in a shoe shop.

Megan Fox dressed up as a banana for her job at a smoothie shop.

Brad Pitt stood on the street in a chicken costume imploring passers-by to dine at El Pollo Loco restaurant.

There are many other forms of “waiting tables”:

J.K. Rowling began her career as a secretary.

Michelle Pfeiffer worked as a cashier at a grocery store.

Harrison Ford was a carpenter.

Angelina Jolie started out as a funeral director.

Colin Powell worked in a baby furniture store in the Bronx.

Bono was a gas station attendant.

Sam Walton started out as a delivery boy.

Martha Stewart was a stockbroker.

Pope Francis was a bouncer at a Buenos Aires nightclub.

Barack Obama worked as a research associate in the financial division of a publishing firm before he became a community organizer.

You get the point.

Many lessons can be gained by studying where successful people began and where they’re at today. I would just point out that their stories prove that there is more giftedness sitting inside “everyday” people than we can possibly imagine—including you.

So why don’t we see more of that giftedness? Many reasons. But let’s start with the reality that sooner or later (probably sooner) all of us are going to end up “waiting tables.” That being the case, we discover that there are only three kinds of people who wait tables.

Some People Wait Tables Because They Are Gifted to the Task
I’ve met a handful of born waitstaff in my life. You know, people who actually thrive on creating the perfect dining experience. They somehow know exactly what I’m looking for in their particular restaurant.

When I just want a relaxed, ease-into-the-day breakfast, they don’t ask me the twenty canned questions about how my day is going so far and all that. They just show up with the coffee, make sure my eggs are hot off the griddle, and leave me in peace to read my iPad. Yet somehow they’re instantly available when I need something. They just somehow convey that they’re sincerely happy I’ve stopped by.

Or how about when a colleague and I want to discuss some business over lunch? The world-class waiter is the one who helps us get the ordering out of the way and delivers the meal with the least amount of intrusion, then beats a quick retreat, returning only to re-fill glasses and remove plates. Very professional. Very attentive. Very out-of-the-way. And very happy to have served us.

And when I’ve got my family out for a special celebration, the gifted waiter puts on a show at the table. S/he quickly figures out who is the honoree, what items will suit each person’s taste, what desserts will most entice, and who should receive the check. You actually believe it when they bid goodbye with the words, “It’s been a pleasure to serve you and your family this evening, Mr. Hendricks.”

Waitstaff who are truly gifted to the task are the ones who should make a career out of waiting tables. I’ve known several who’ve done just that. They haven’t gotten rich. But then, that’s not really their objective.

Of course, the principle of doing what you’re gifted to do extends to every other occupation. In every field, whether teaching, finance, sales, accounting, manufacturing, the military, government, or even (and perhaps especially) the funeral industry, our world would be infinitely better off if we had more people working at jobs that actually fit them instead of just paying them.

Some People Wait Tables Because They Are In Transit
Sometimes you wait tables as a temporary job. You just have to make ends meet while you’re waiting for your ship to come in. Quite a few of the people mentioned above were doing precisely that when they were “waiting tables.”

I know people who sell houses, work in accounting, do event planning, tutor students, and yes, wait tables and do other “day jobs” while working on a dream they have. That dream can’t support them quite yet, because it takes time to produce genius. But rather than just put their dream on the shelf, they nurse it along after hours.

Will their dream ever come to fruition? Who knows? There are no guarantees in life. Except for one: it’s guaranteed that nothing happens for the person who does nothing with their dream. Better to wait tables while your true gift matures and awaits the moment of opportunity than to bury it in the ground and complain that the world is cruel.

That dream or vision or career goal gives you hope.

And you need hope because whatever you’re doing to “wait tables” may not be the best use of your giftedness. But that’s okay, because you know that your situation is only temporary. You’re going somewhere. You’re not stuck. Your current circumstances are just a stepping stone, just a day job. You’re not married to it. It’s like a date with someone you met on-line. You don’t approach it with the expectation that things have to get serious. It’s just lunch.

Which is a nice segue to people who have no dream or vision or career goal. . .

Some People Wait Tables Because They’ve Settled
By far, this is the most common reason for waiting tables (or any other kind of work that someone can’t stand). However they ended up where they ended up, these are folks who have just settled. They’ve thrown up their hands and said, “Well, I guess this is as good as it gets for me. I looked around and couldn’t find anything better. So I’ll just hunker down here and do my job. Sigh! I guess that’s why they call it ‘work.’”

In an earlier post I pointed out that more than two-thirds of today’s workforce feel no personal stake in their jobs, according to Gallup. Fifty-two percent are just marking time, and 18 percent are actively “dis-engaged” and working counter-productively.

What accounts for that? I believe one big reason is that a lot of people have settled for jobs that don’t fit them very well. They’re doing work they can do but are not born to do. So their hearts aren’t in their work. It’s “just a job.”

If waiting tables is just a job, you’re likely going to hate being a waiter. And we’ve all experienced that kind of waiter.

That’s the waiter who doesn’t show up for five minutes after you sit down at the table. The one who is rude, or surly, or incompetent, or timid. Or conversely is over-the-top with too much canned energy and false enthusiasm. It’s the waitress who doesn’t keep the coffee hot. Who forgets to re-fill the glasses. Who gets the order all wrong. Who has “attitude” with the manager. Who grumbles that no one leaves a very big tip anymore.

Bad “waitstaff” can be found in every field and occupation, whether teaching, finance, sales, accounting, manufacturing, the military, government, or even (and perhaps especially) the funeral industry.

Thanks to the habit of “settling,” countless experiences in life prove to be most unsettling.

So how are you “waiting tables” right now? Remember, there are only three reasons why anyone waits tables. Only two of them are legitimate. The third is highly suspect.

Question: Can you think of someone who is truly gifted to the task in their work? Tell me about them. How can you tell they are doing what they were born to do?

NEXT POST ON BillHendricks.net: The Power and the Perils of Teams